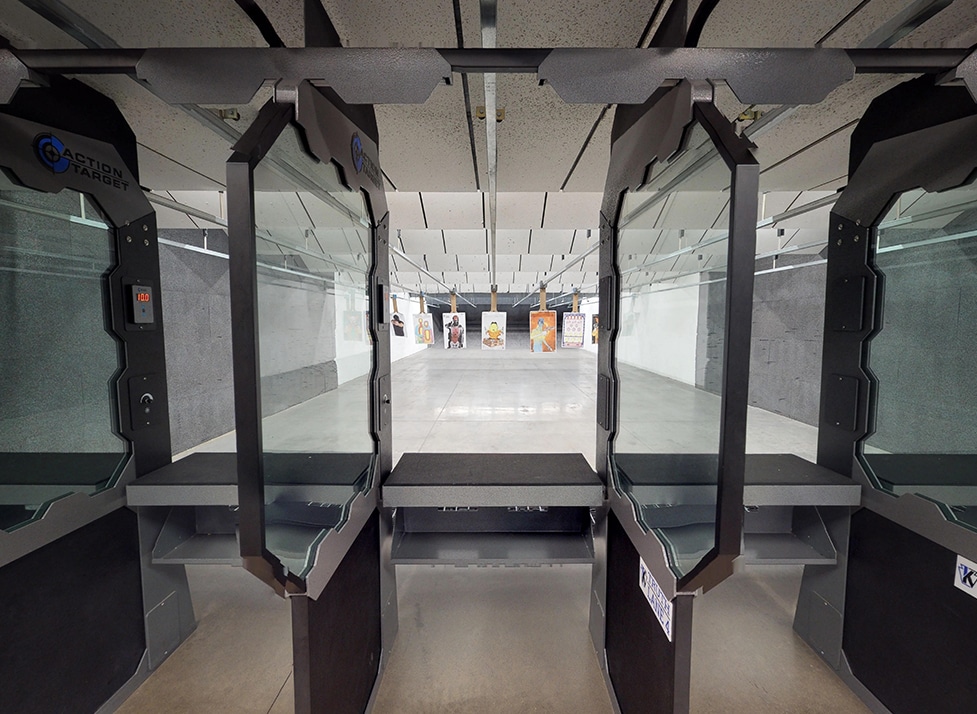 With Gun Rentals in Pittsburgh

Are you a new shooter who doesn’t yet own a firearm, or an experienced shooter on vacation near Pittsburgh, PA? Whatever the case may be, you can enjoy a thrilling day at your local indoor shooting range — even without your own gun — at Keystone Shooting Center.

Keystone Shooting Center is a world-class gun range that rents firearms to both members and walk-ins. We offer an extensive selection of more than 100 guns for rent, including guns manufactured by top names such as Beretta, Glock, Sig Sauer, CZ, Benelli, H&K, Smith & Wesson, Kimber, Colt, FN and more.

All rental firearms must use ammunition purchased at Keystone Shooting Center. We offer rental guns to meet the needs of nearly every member or walk-in. Choose from a wide array of calibers, types, configurations and actions for your convenience.

prices are as follows for 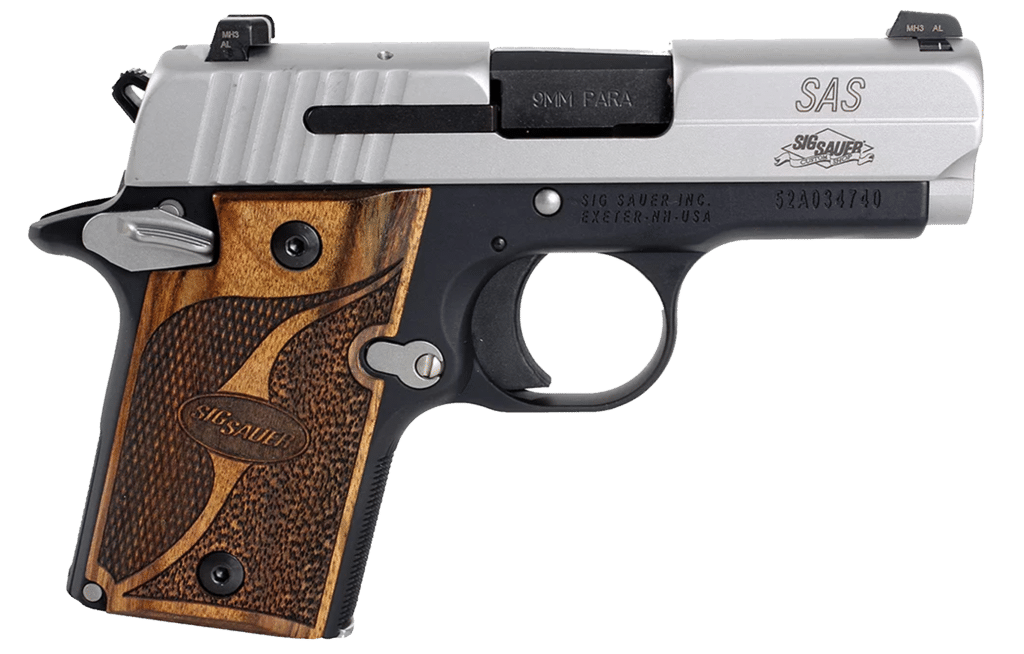 Inspired by the P238, this more powerful 9mm is still easy to conceal and even easier to shoot. 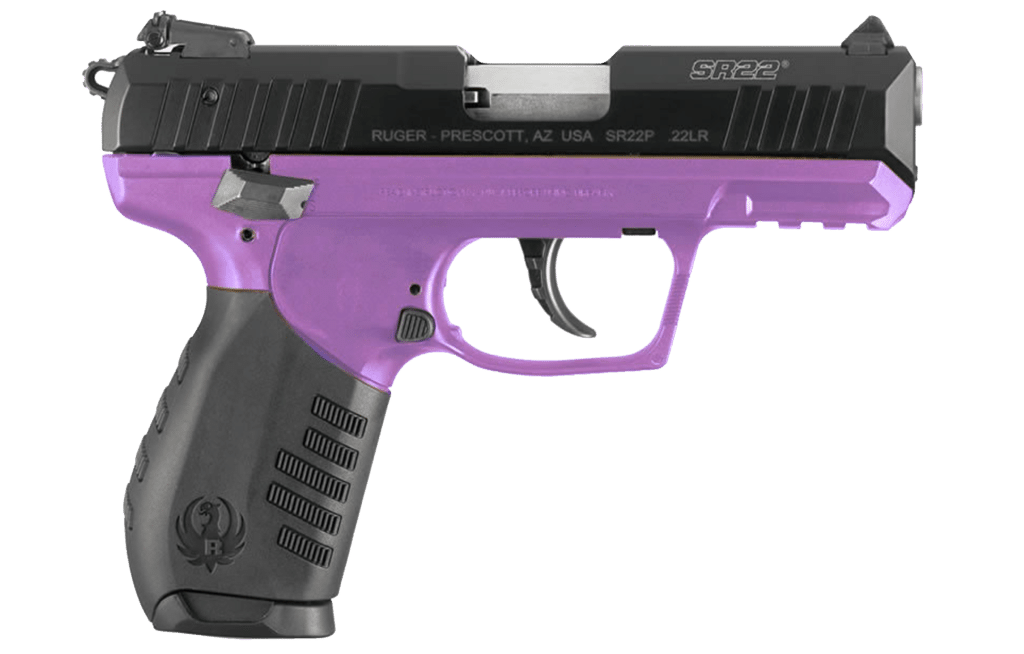 THE DO-IT-ALL PISTOL FOR THE SHOOTER WHO APPRECIATES STYLE AND DEMANDS RELIABILITY! 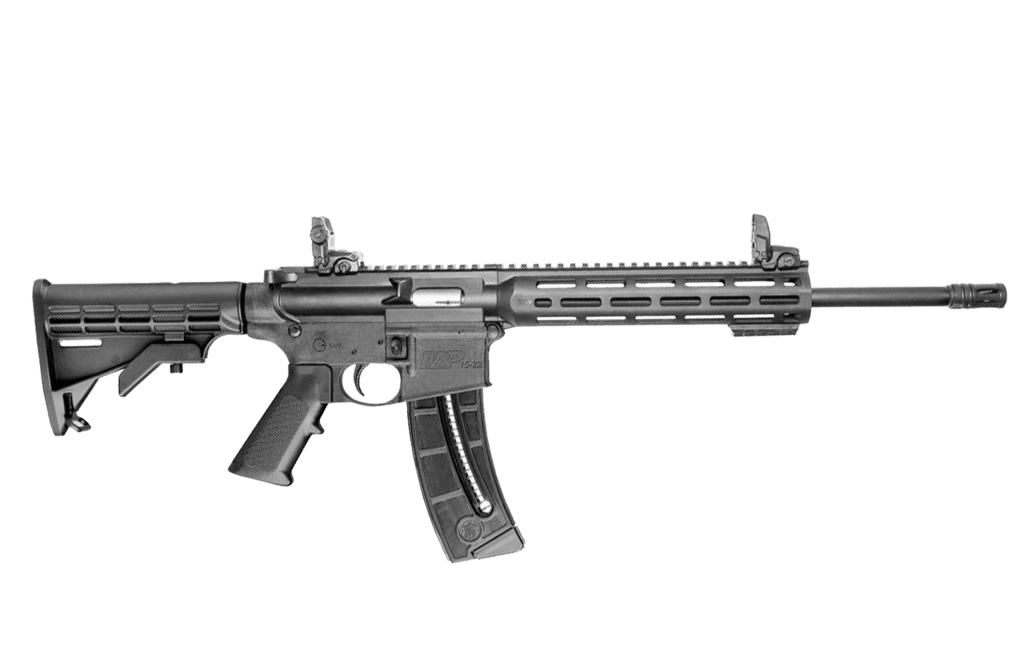 The M&P15-22 SPORT features a 10-inch M&P slim handguard that incorporates the popular Magpul M-LOK™ system. The M-LOK system allows rifle owners to easily customize their M&P15-22 SPORT by adding accessories without removing the handguard. M&P15-22 SPORT owners have the option of easily mounting numerous M-LOK-compatible accessories or any number of Picatinny-style rail sections designed to accommodate other accessories. Smith & Wesson includes a 2-inch M-LOK rail panel with each rifle.  The M&P15-22 SPORT comes standard with one of the most popular folding sights systems available for MSRs. The removable Magpul MBUS® front and rear folding sights are lightweight and durable, further enhancing the performance and value of the new M&P15-22 SPORT. 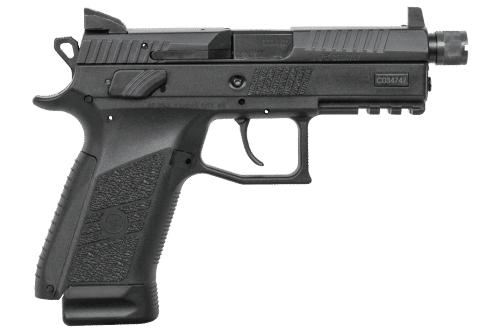 Loaded with features but without all the flash of the Urban Grey series, the standard black P-07 Suppressor-Ready comes with high night sights and extended magazine bases in addition to the obligatory extended, threaded barrel (1/2×28).

The CZ P-07 is the updated version of the CZ 75 P-07 Duty. The debut of the full-size P-09 brought refined lines and interchangeable backstraps to our polymer Omega line. The P-07 follows suit, with new features and a nitrated slide finish that wears longer and has increased corrosion resistance. The pistol as a whole has been dehorned, removing any sharp edges to make it more comfortable for all-day carry.

Like the P-09, the P-07’s safety and decocker are interchangeable with a few minutes and minimal tools. Add to that small, medium and large backstraps and an integrated 1913 Picatinny rail on the dust cover and the P-07 is adaptable to the shooter and their needs, from service pistol to bedside protector to the envy of the shooting range.

The P-07 shares the P-09’s updated trigger shape which is more comfortable for long days at the range, as well as its snag-free hammer and forward cocking serrations. Metal 3-dot sights and a beefed up magazine spring round out the bevy of updates, resulting in the best P-07 we’ve had to date. 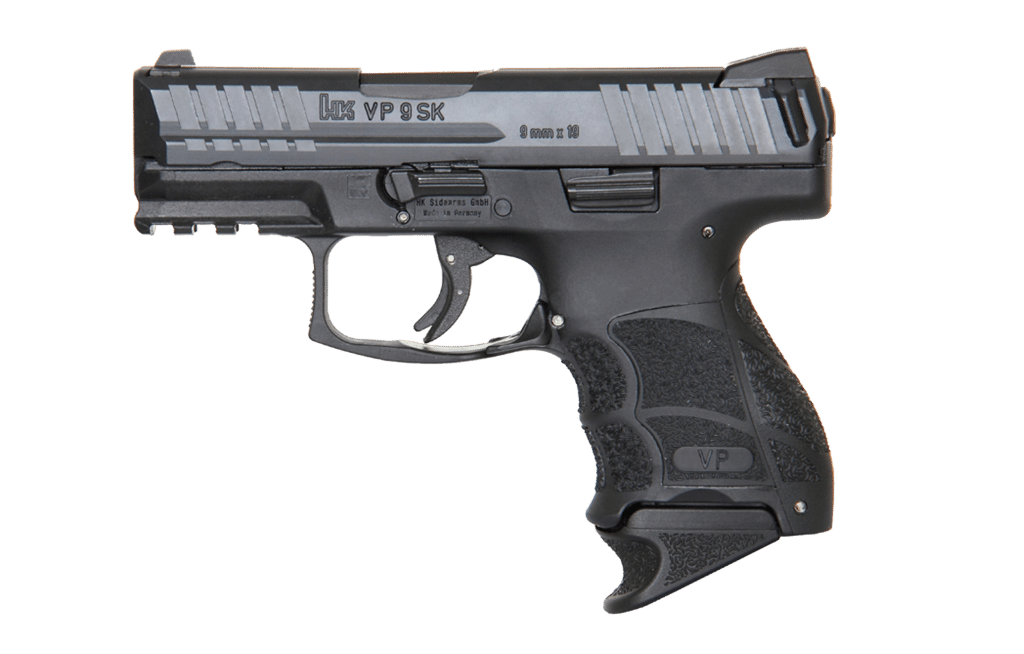 The eagerly anticipated subcompact model of the acclaimed Heckler & Koch VP Series handgun, VP9SK (in 9 mm) has all of the sought-after characteristics of larger frame VP pistols but in a more concealable design.

The highly-rated HK VP precision strike trigger is also found on the VPSK. The VP trigger surpasses those found on competitors. It has a short, light take-up with a solid, single action type break followed by a short positive reset. The net result is trigger quality unmatched in production striker fired pistols.

A small-scale interpretation of the completely adjustable VP grip feature — consisting of interchangeable backstraps and lateral grip panels — is replicated in the compact grip frame of the VP9SK. This allows the pistol to be easily modified to fit any individual user and is a feature found only on Heckler & Koch handguns. Molded finger grooves in the front of the pistol’s grip also instinctively position an operator’s hand for optimal shooting.

The VPSK has the features of the latest, state-of-the-art handgun. All controls are completely ambidextrous. Slide releases are present on both sides of the frame and the paddle style magazine release can be easily activated by left- or right-handed shooters.

VPSK pistols can use a variety of proven HK magazines, including compact double stack 10-round flat floor, 13/15-round extended magazines for a more ergonomic grip.

VPSK pistols have an abbreviated Picatinny MIL-STD-1913 rail molded into their polymer frame for mounting lights and accessories.

The VPSK’s machined steel slide is protected from corrosion and wear by HK’s hostile environment finish and all metal components, including springs and pins have superior metallurgy.

Despite their small size, VPSK subcompacts have excellent weight and balance making them naturally pointable, easy to control, and accurate to shoot. VPSK models are currently available in 9 mm.

VPSK pistols are made in Heckler & Koch’s Oberndorf factory in southwest Germany and are well suited for civilian sport shooting, security, military, and law enforcement use.

A high quality and well-engineered design, the VP9SK possesses all the features and long-term durability that make HK products especially cost-effective when subjected to total life cycle cost analysis. 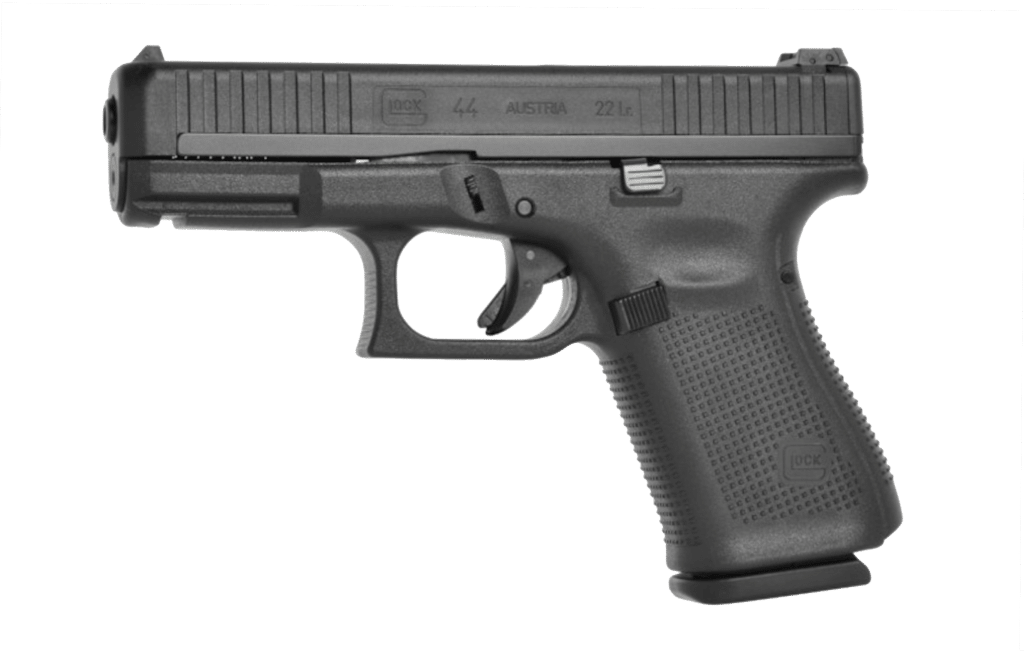 Once you start with perfection – you stay with perfection. The G44 is the ideal pistol to start or enhance your shooting experience.  The innovative design of the hybrid steel-polymer slide chambered in our first .22 caliber round   provides a lightweight and low recoil functionality for optimal control.

The G44 was thoroughly tested with a wide variety of ammunition to ensure maximum performance and redefine what small can do.

The G44 is a compact size pistol with the ability to adapt to nearly every hand size by using the different backstraps supplied with the pistol. The G44 comes standard with the GLOCK Marksman Barrel (GMB) for increased accuracy and precision.

The right equipment is essential. The G44 comes with adjustable rear sights and two load-assist magazines. Everything that a well prepared shooter needs. 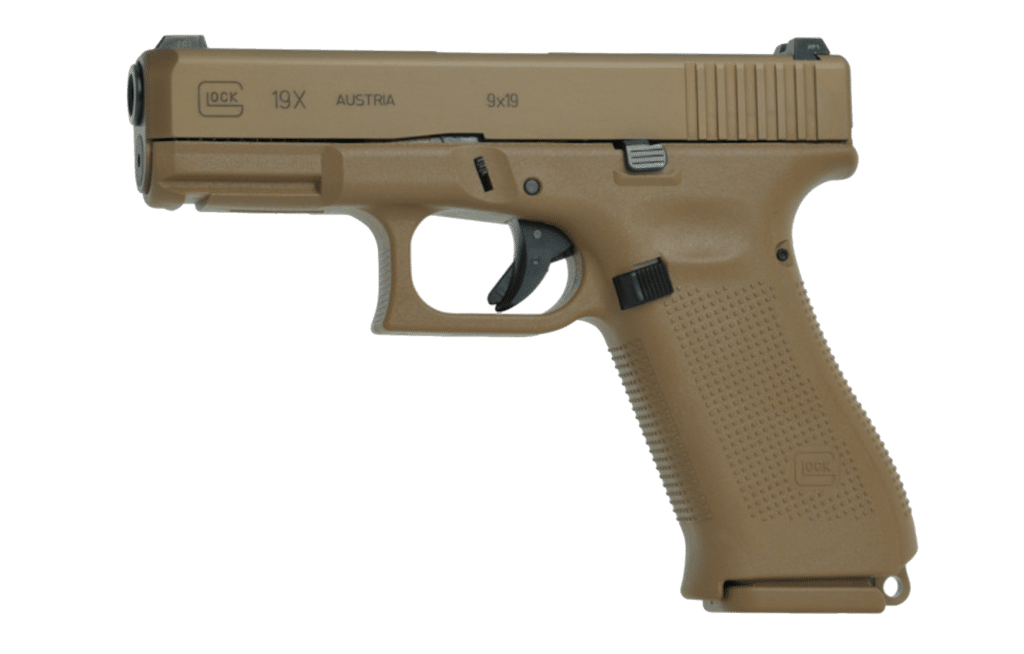 GLOCK’s first ever “Crossover” pistol, the GLOCK 19X, combines the best features of two of its most popular and most trusted field-tested platforms. The full-size GLOCK 17 frame and the compact GLOCK 19 slide have joined forces to produce the ideal pistol for all conditions and all situations. The 19X comes in the coyote color with the first-ever factory colored slide, finished with an improved nPVD slide coating to prevent corrosion. Additional features include the GLOCK Marksman Barrel (GMB), no finger grooves, ambidextrous slide stop levers and lanyard loop. Included with the pistol is a standard 17-round magazine, two 17+2-round magazines and coyote-colored pistol case. 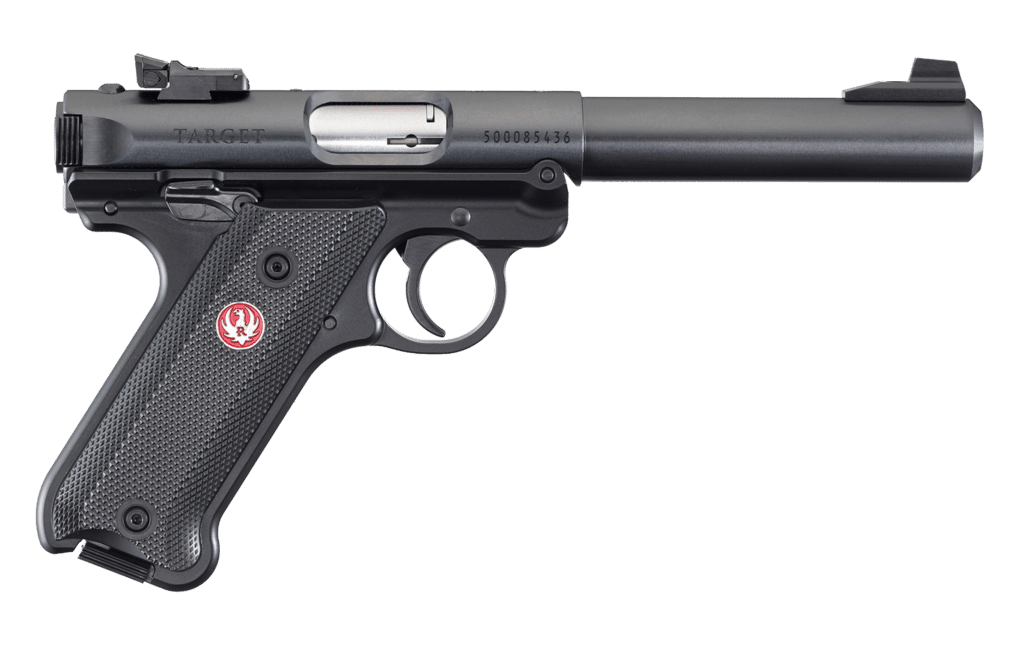 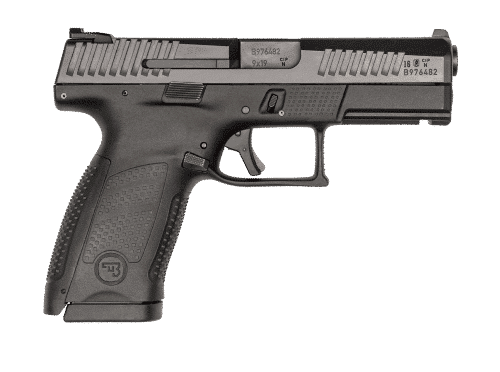 Much more than just our take on the striker-fired pistol, the P-10 is decidedly CZ, from the way it feels to the way it shoots.

First order of business, ergonomics. Anyone who’s picked up a CZ 75 for the first time gets it — it just has to feel right in the hand. With the CZ grip angle, the P-10 avoids that ‘brick-in-the-hand’ feeling that has plagued many in the striker-fired genre, allowing it to point naturally. A mild palm swell, deep beavertail and three interchangeable backstraps make the P-10 fit a wide variety of hands as if it were built for them. Because it was.

Next up, trigger. So many striker-fired pistols do many things right, falling short when it comes time to pull the trigger. The P-10’s trigger is designed to minimize creep and stacking, and after initial break-in averages a clean 4.5-5 lb pull and rebounds with a short, positive reset — meaning single shots can be meticulously placed while follow-ups are effortless.

Built to withstand the rigors of military use, its fiber-reinforced polymer frame and hardy nitride finish are made for the daily grind. A generous trigger guard allows use with gloved hands while being undercut to allow as high a grip as possible, and a set of metal tactical 3-dot sights allow for one-handed manipulation of the slide on a belt.

Choosing the right caliber for your needs is crucial. Your gun’s caliber determines the amount of recoil you’ll face, the size of your firearm and the gun and cartridge combination’s effectiveness. A first-time shooter might be more comfortable and shoot more accurately with a low-recoil cartridge, such as a .22 or 9mm — although you should also take factors such as gun size and barrel length into account when finding your ideal firearm.

We offer a range of calibers to accommodate both experienced shooters and first-timers. Choose from:

The type of gun you choose to practice with will vary depending on your intended use. Among our gun range rentals, you’ll find:

If you have a preferred firearm configuration, we offer an extensive selection to meet your needs. Pick from gun configurations including:

We also offer both single-action and fully automatic guns for rent. Each offers unique advantages for new and experienced shooters.

Keystone Shooting Center is a veteran-owned and -operated business in Mars, PA. As one of the top shooting destinations in the country, our priority is to make you feel at home in our service-oriented range.

Enjoy shooting some of today’s most popular firearms — including AR-15s — in a 25-yard, climate-controlled lane. With an extensive selection of rentals, competitive prices and a range of services to accommodate both new and competitive shooters, Keystone Shooting Center offers a unique experience you won’t find anywhere else in the Pittsburgh area.

Contact us at (412) 357-8000 for more information about our facility or available rentals, or stop by our facility to get started. If you’re a beginning shooter, we’ll be happy to help you choose the best rental firearm for your needs.

Great facility, Friendly Staff and great range officials making sure safety and having fun is their primary concern. Great for the whole family.