Whether you’re a hunter, sport shooter or concerned about self-defense, you should become familiar with your state’s concealed carry laws. Every state has a different set of regulations, and the fine details differ for each county and city. The more you know about your state’s allowances, requirements and reciprocity agreements, the better prepared you’ll be if and when you decide to apply.

Pennsylvania has a relatively straightforward process and set of requirements for potential concealed carry applicants. This guide will help you understand the ins and outs of concealed carry laws in Pennsylvania, from eligibility to the application and renewal processes.

Is Concealed Carry Legal in Pennsylvania?

Every state has individual gun laws. Some states don’t issue permits and have deemed carrying illegal, others issue permits at varying degrees of discretion and some allow concealed handguns without a permit. Even then, some counties and cities may have stricter rules than others. But the state government dictates the legality of concealed carry and the minimum requirements for a license.

Pennsylvania is referred to as a shall-issue state, where an individual shall receive a permit for a concealed carry as long as they meet the specified requirements and complete any applications. While the carry regulations may differ slightly in different townships and cities, the law covers the whole state. So, as long as you have a legal and valid permit, you can carry anywhere in the state, unless an area is specifically restricted by a local government.

Can You Carry Without a License?

In most cases, you cannot carry a handgun without a license. According to the Pennsylvania Criminal Code, Title 18, Chapter 61, if you carry a firearm in public without a valid and lawful license in Pennsylvania, you are risking a first-degree misdemeanor charge, or up to five years in prison and $10,000 in fines. If you’re ineligible to apply for a license, the charges increase to a third-degree felony, which entails up to seven years in prison and $15,000 in fines.

Several states have open carry laws, where you don’t need a license. However, Pennsylvania law dictates that you need a permit, and may only carry a gun without one in detailed circumstances. There are only a few instances when you may carry a firearm without a license or permit for it, including:

While a Sportsman’s Firearm Permit allows you to transport a gun in certain situations, it’s not the same as a license to carry. With a Sportsman’s Firearm Permit, you are allowed to carry a legal, loaded weapon if you are hunting or traveling to and from a site within the designated season. It doesn’t account for public spaces or for use anywhere outside of hunting grounds.

What Are Firearm Reciprocity Agreements? 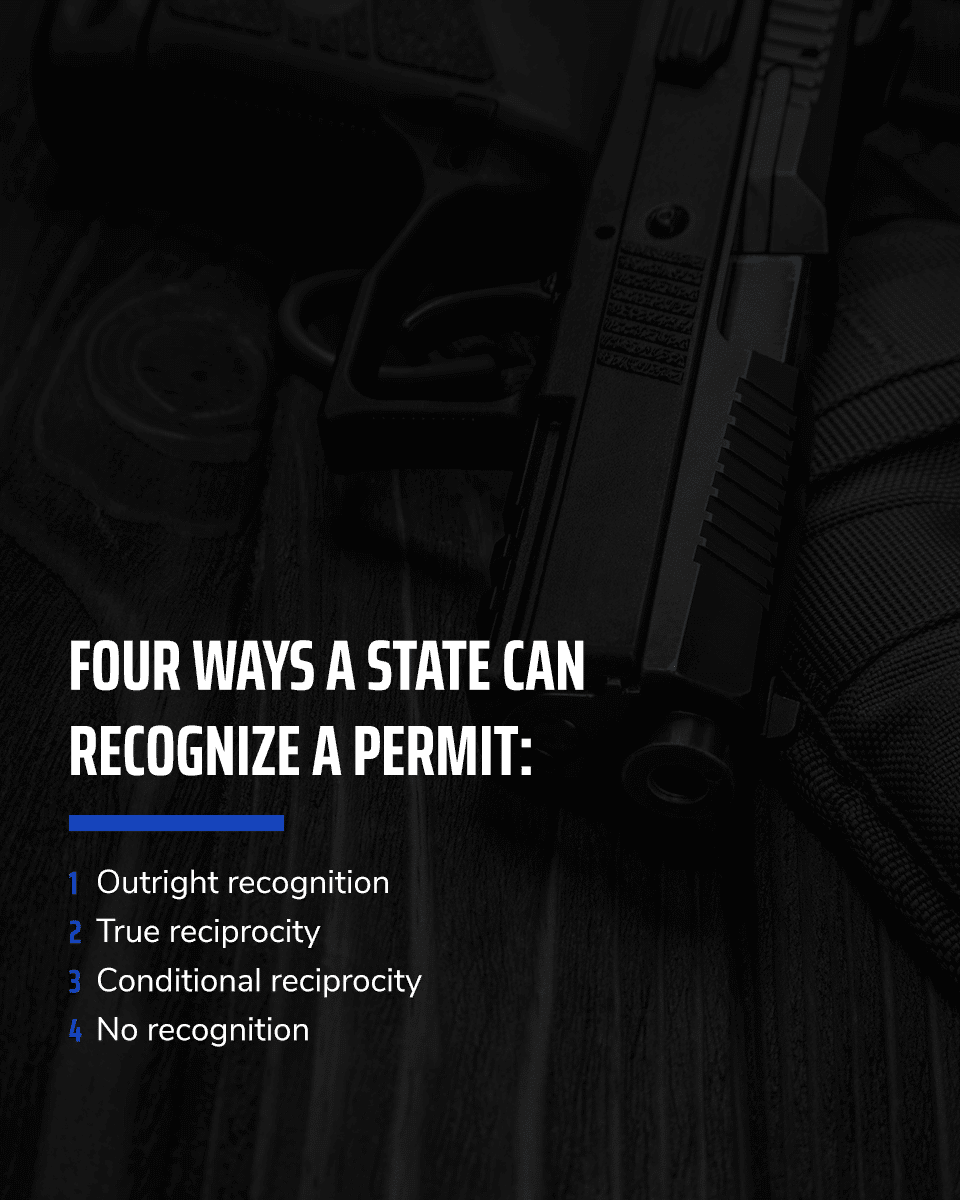 These are important regulations for anyone who plans on traveling with their concealed carry handgun. Upon crossing state lines, you could be entering a zone where your license is fully legal or where it means nothing. Check to see if your destination state recognizes your home state’s licensing laws or if they have a reciprocity agreement. For the most current concealed carry reciprocity agreement list, you can use the public resources on the Pennsylvania Attorney General’s website.

What Are the Requirements for a Concealed Carry License?

Before the state can grant you a license, there are a few things you need to be able to apply. The state can deem you eligible or ineligible before you even touch the required forms, and you have to make it through the process, references and background check after you submit.

If you are a Pennsylvania resident, the criteria for applying for a permit include:

For those who aren’t residents of Pennsylvania, you’ll also need a valid and lawful concealed carry license from your home state. You need one to be eligible for an out of state permit. Check to see if your home state and Pennsylvania have an active reciprocity agreement, as you may be denied if there isn’t one.

If you are eligible and wish to submit an application, you can find the required forms online or at your local sheriff’s office. The concealed carry permit lasts a period of five years once it’s issued, but it can be revoked at any time due to criminal activity or reasonable concern. It will stay active as long as the owner remains a resident of the state in which the permit was issued and retains a clean legal record.

Who Is Ineligible to Apply?

Just as there are requirements for applicants to meet before submitting for a license, there are also some restrictions on who can legally apply. Individual states detail most of the regulations that come with issuing concealed carry permits. But there is a federal law that dictates which individuals aren’t allowed to apply for a license or receive or possess a handgun at all. The list of reasons for ineligibility include individuals who:

These are the federal requirements for restricted eligibility. At a state level, governments can set stricter laws, and county sheriffs can turn down an applicant due to their criminal history or character.

How to Apply for Concealed Carry License

While the requirements in Pennsylvania are strict enough to require a thorough background check and form submission, the application process is relatively straightforward. As soon as you decide to obtain a license, you can receive one within two months.

There are three steps to follow to apply for a concealed carry permit:

On the application, you need to note your reasoning for submitting and seeking the permit, which can be for a form of employment, hunting, self- and home-defense, gun collecting or another sufficient motive. If your application is thorough and there are no disqualifications between the submitted forms and investigation, law enforcement will issue you a license.

How to Renew a Concealed Carry License

Once you’ve been issued a license, you can renew it as the five year period comes to an end. The renewal process is about as straightforward as the application but requires several different steps. If you start within the acceptable window, as long as you haven’t become ineligible, you should be able to obtain a new license with ease.

To renew your permit, you need to follow several steps:

Once you’ve received your renewed permit, it’s valid for another five years. You can continue renewing as long as you remain a Pennsylvania resident with a clean legal record. If you miss the deadline for renewal, you will have to submit as a previously unlicensed applicant.

Where Can You Carry a Concealed Weapon With a Legal Permit?

As long as you have the proper legal license, you can carry in any area deemed legal by the state and local laws for your area. The allowances may differ slightly, but there is a broad set of location restrictions for the state of Pennsylvania.

With a concealed carry permit, you may have your weapon on your person in restaurants that serve alcohol, at roadside areas and rest stops, in state and national parks and forests and in privately-owned places with a notice that allows for it. Even with a license, there are several off-limits areas, such as elementary and secondary school buildings and grounds, courthouses, detention and correctional facilities, mental hospitals, secured airport areas and any other areas restricted by federal, state or local law.

Specifically, with concealed handgun laws in Pennsylvania, you also may not carry in the public areas of the One Penn Center in Harrisburg and any parks and buildings owned by the city of Philadelphia. These are regionally specific, which is why it’s important to brush up on legal allowances whether you have a permit or not.

Whether or not you have your concealed carry permit, you can still practice your skills at the range. Keystone Shooting Center has everything you need to become a seasoned shooter, from gun rentals and purchases to guided classes and lessons. Our staff will show you everything you need for a concealed carry weapon and how to care for it properly. With 24 climate-controlled shooting lanes, full rentals and a large facility run by professionals, Keystone Shooting Center will help you comply with the Pennsylvania state laws.

For more information on the services we offer, contact us or drop in for a visit.

Very modern and welcoming gun shop, I came here originally for gunsmith services which were top notch and very reasonably priced, I highly recommend this place for first time gun owners as it has everything you need from firearms for any budget, classes to help with responsible ownership and an indoor range to learn the basics and more, staff is extremely friendly helpful and knowledgeable and the store is spotless top to bottom I hope this place grows and expands as it makes a great impression on the second amendment, I’m glad this place is 40 minutes away because I feel like a kid in a candy store and would be broke in no time